Zir velociraptor tears through the living room while ze warms zir feet on zir puppy. World War II slogans and collections of posters are scattered across their laptops as ze takes a break to stalk Facebook for stray mice. Campaign headquarters has Dominos pizzaboxes on the dining table, and Max helps himself to another piece despite his food allergies. They are plotting the moves to topple the lobbyist dominated governments and replace it with the order and chaos that humanity deserves.


Heading up the new mission with a wulf heart to steady zir passions, the Tainted Prince is hard at work doing what ze does best: Inspiring the imagination of zir followers. They know what they need. Ze just needs them to pay close attention to how to get what they want. Cutting deals with the shadows for New Rocks and Breathless latex, ze's preparing a full frontal assault with promises of flanking for those lovely and loyal servants who prefer it from behind. Entirely gender flexible, the Prince embraces any person who elevates themselves above the rabble and lets the wolves sort the rest. Wearing zir silver Cyberdog leggings and knee height New Rock boots, zir lean body is draped over the couch when Max returns. Zir puppy is off to fetch something for dessert, and the dinosaur lad is being suspiciously quiet. Still juggling a dozen plot threads, the Tainted Prince asks after the latest stories while fussing over Cards Against Humanity themes. There's always so much to do, and zir cloudbursts of ideas drench the fertile soil as they both try to keep up.


For zir, it's more than just an opportunity to plot. Ze wants a legion, a calvary of pups to serve zir whims, and might just be hoping to tap into Max's network of lovely ladies. After all, Team BED can always use a few supporting cast members. For the Tainted Prince, the world is a stage, and the thunderous roar of the audience repays the sacrifices required of the passionate performers. Ze was amazed when zir stories came to life with Miez, but the Prince is clear that no matter how sweet Max makes zir seem, zir claws thoroughly enjoy leaving their mark and scarring zir prey.


Watch for the Tainted Prince to propose a new solution for the human nations. It'll be a choice: Allegiance to royalty or fury of the wolves!


Curl up at zir feet and accept submission to a greater power. 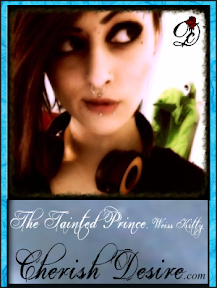 "All The Prince's Men 1: Her Specialty (A Miez Story)"