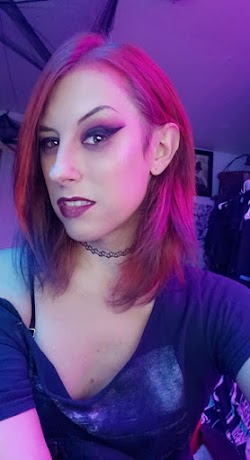 “Am I reading these naked?” Kenzi asked while considering the narration project proposal. Honestly, I wasn’t sure I wanted to even deal with video since audio mastering is such a nuisance on its own. Video editing and mastering adds an additional layer of effort. Naked on top of that would mean I couldn’t even distribute the resulting content for promotion anywhere that it could reach my reading audience. People watching sex videos are rarely interested in taking the time to read books. Why work so hard when they could get a fast thrill seeing the action? But maybe that was Kenzi’s point. “I’ll take care of all the post-production. Trust me. People like watching a sexy woman read.” I couldn’t disagree with that.

Kenzi had her own reasons for convincing me to fund video narrations. She wanted to perform. She wanted to act. She wanted to embrace the characters in these stories and experience what they were feeling while conveying that to the invisible audience. We are all creators first. Kenzi wanted to create something meaningful at a time when so much had been stripped away from everyone during the pandemic.

Agreeing to move forward, this was the start of a magnificent collaboration. The Halloween timed release of the react performance video for “Object Confessions 85: Faith Based Religion” was a wonderfully devious test of what we could do. The follow-on video erotica performances including She Comes First, Sexy Identities, Angel, and Pursuit of Purpose stories were underway. Kenzi’s writhing body language while trying to hold still as the words slipped from her lips were mesmerizing. When she bit her lip while murmuring something and flubbed a line, the FICS GONE WORSE reads included the rant that followed. It’s fine. Fine. Totally fine.


That’s the official blurb anyway. There's always more when you take the time to listen.


Kenzi brings a different experience to Cherish Desire Erotica. Her amped up femme narration of Lelith’s “She Comes First 2: Scorned” is set within the shadows of a goth boudoir. She swallows, explores the words, “For what? Sex and death...” and then races into the text’s furious domination. Wearing fishnet thigh highs that she pets while working her way through Angel’s sexual pursuits, the camera is set high to gaze upon Kenzi’s cleavage. “Maybe Stryker... or Holmes?” It’s not Angel’s voice but hers, and Kenzi shapes words put in her mouth with raised eyebrow and a gaze directed at the audience. This is a performance not just a reading.

There are many strong reasons justifying selecting Kenzi, why she was the perfect person to invite to narrate a handful of the latest stories, but the proof of what she is capable of is still something we’re exploring. I’ve seen her before, interacted with her, even though she has no recollection of that. Her touring schedule overlapped with my festival and event attendance several times. Within my redundant social networks, Kenzi comes up on a regular basis because she has accidentally intersected my orbits with her own. One of her mentors is someone I’ve considered a friend for nearly two decades. A polycule whose trajectory has drifted close to my constellations randomly shared Kenzi’s latest FICS GONE WORSE project when I was looking for a narrator. Perhaps that’s not surprising because the scene in North America is small, but Kenzi has earned tolerance and patience from people whom I know are very conscious and aware of choosing whom they will deal with on a regular basis. A superstar is going to make an impression, leave an impact in their wake, and Kenzi is unwittingly entangled within clusters of people I already navigate. The impression matters. The impact is a basis for consideration. In this case, for now, there is a lot of positive potential.

On top of that, novellas like “Object Confessions - Distinct” come from a place of damage and trauma that required a narrator who can connect with these things. Intuitively. Intimately. At times, dangerously. There’s a world of hurt and harm in our past. Kenzi lives within that, and she brings it to the audience, makes them uncomfortably aware of how deeply wounded we all are, and does so in a manner that expresses sympathy and suffering simultaneously. Emotions I can simulate but am no longer human enough to feel in the way others do. Emotions I didn’t think would be narrated properly because I hadn’t considered how important the performance is versus just conveying the words on the page.

I suppose this amounts to an aesthetic of sorts. Kenzi is so busy keeping busy, hustling to make ends meet like everyone else we know, that it’s a good mask for working through her own trauma and pain. What she pours into these performances is more than what I asked for because she has so much more to give. Exhaling, laughing or crying, she’s living through each woman who serenades within the unheard echoes of her words before they fade into the next sentence. Women I knew. Women crafted from my reality. And it is fascinating to see how Kenzi sounds them out. Expresses them. Evokes them. And shares the fleeting scenes of their lives which I captured before my memories of them faded.

Maybe that’s what was missing all along. To be performed, to be voiced, to be shouted and whispered into existence from the lips of another. To be felt through their internalization of our defeats and triumphs. To be lonely together for a brief moment. To be acted out within a boudoir, stage mic hidden as the camera latches onto Kenzi’s expressions, and given one last chance to take the world by storm. Maybe that performance makes all the sacrifices worthwhile.

Maybe you know what we mean by that.