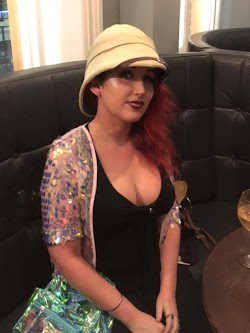 The sound of drums marches as she smiles and charges up the hill in the rain. I was cautiously watching because happiness is contagious, and I have an image to maintain. The Improbable Woman won me over anyway. Dance floors are brighter when she is nearby, and the Wheel of Excellence will never be the same without her. She throws off heat like a candle burning on both ends, and you cradle her inspiration close because you want to see her in that light. We bonded over improbable things, and that suited us both fine.

Dragons. It’s the sort of thing you never quite expect to hear but are overjoyed when it comes up. Lelith smiles and wets her lips, drags us into a Neros for a coffee, and doesn’t dare ask if that’s what’s weighing down my backpack. Shoeboxes tugged from her own bags, she claps her hands and makes room for each of her precious babies after a quick cuddle and kiss. I can only hope that Bad Dragon keeps coming out with new fantastic ideas. I thoroughly enjoy spoiling Lelith rotten for all the contributions she’s made to Cherish Desire. Actively and… as a muse for ideas to explore within the silent hotel rooms of cities on her half of the globe.


That’s the official blurb anyway. She's always off on an adventure though.


Lelith goes by many names. The consequence of being a multiplicity all the way to the genetic level. She is truly improbable. With two sets of DNA and two immune systems constantly battling one another, she is always one step from the perilous unknown. Precious and sincere, she grins as we share a wander through the hills and tangled shops of Brighton before she’s off with her heavy bags stuffed full of new dragons to tuck in and care for once they arrive at their new home. She writes slowly, her emotions tempered in careful phrases, but each story is full of passionate fury. At times, collaboration becomes something more singular as the stories take on their own life and storm the castle gates. Sometimes she vanishes, living her drumming life and visiting her owl friend, and there is silence.

This last time that felt like the end. People with compromised immune systems have good reason to see a pandemic as their worst nightmare. Even before that, she had been slipping from the constellations into orbits of her own fashioning. As she does. As Max does, too. And in their wake are legion, the echoes and whispers of forgotten half-truths which become myths in the imaginations of those who briefly thought they saw the sunrise long before the dawn. The glitter and crust of bath bombs left behind on the lips of hushed hotel tubs. The photographs where they stand out despite being engulfed within a massive crowd. The lovers who bite their lower lips in pauses between slowly sounding out the words that Lelith spilled into a notebook with colourful inks.

She reaches out, aware that there is distance, and, with the pragmatic sense of a woman long used to looking after her men, Lelith may have felt the loss in his heart. Or maybe not given how careful she has to be and how small her world has become. We’re just surviving now, clinging to the imagination of what could have been, but imagination has always been her specialty.

“You’re a strange one,” she once told Max. He took it as a compliment. As proof that she might actually see him for who he is versus the projections others constantly threw at him.

Maybe that’s all any of us ever need. To be seen for who we are. To be known for a moment. To be recognized by an Improbable Woman who smiles, shakes her head, and goes back to dancing with a laugh. Maybe that moment changes everything.

Maybe you know what we mean by that.